SUJAN DUTTA New Delhi, Jan. 14: The sacking of Avinash Chander as the country’s top defence technocrat yesterday has brought back into focus allegations of murky deals with international arms lobbies, corruption and nepotism, professional jealousies at the top and a failure to deliver usable and accurate weapons.

The rot had institutionalised itself over the years — long before Chander was appointed to the post on May 31, 2013 — and marked even the tenure of his predecessor, V. K. Saraswat. Saraswat was last week appointed as a full member of the Niti Ayog, which took over some functions of the Planning Commission, with the rank of a minister of state.

Defence minister Manohar Parrikar said today that even he had learnt of the sacking of Chander from the media though he had recommended that the office should be held by a younger person. Like Antony, the defence minister in the UPA II regime, Parrikar has also promised a revamp of the Defence Research and Development Organisation (DRDO) that Chander headed.

In addition to his job as the head of the DRDO, Chander was also the scientific adviser to the defence minister.

In New Delhi, the headquarters of the DRDO is a gleaming block of Jaipur sandstone behind South Block. Entry is restricted. The terrace on the third- floor offers a view of the central vista rivalled only by the buildings on Raisina Hill. It is from here every other month, year on year, that the DRDO makes claims of successful missile tests, and of being avant- garde in technology.

The claims only make for a smokescreen that barely dispels the rot that has set into the government outfit that this year has a budget of more than Rs 15,000 crore for 52 establishments and 30,000 employees, including 7,500 technologists.

DRDO insiders believe Saraswat and Chander never got along though both had similar profiles before rising to the top. Both Saraswat and Chander are missile technologists, both protégés of the original missile man, A. P. J. Abdul Kalam. While Saraswat was credited within the organisation for the development of the surface- to- surface Prithvi missile and its variants, Chander was honoured for his contribution to the Agni series.

Parrikar said the impression that Chander had been given an extension by his government after superannuating in November ” was wrong”. Chander’s appointment for three years was approved in May 2013. Under the terms of the order by the appointments committee of the cabinet, he would retire in November and continue to serve for a further 18 months on a contract.

” And my contention was that such a post of that importance cannot be held by a person on contract,” the defence minister said.

In the UPA regime, Saraswat, Chander’s predecessor, ran into tough times with the establishment himself.

Antony restricted his fiscal powers and instituted an audit of the DRDO by the Controller General of Defence Accounts ( CGDA).

The report by the CGDA said, among other things, that the DRDO was entering into agreements with Israeli firms unnecessarily. It specifically named one Israeli firm, Semi- Conductor Devices Ltd, with which DRDO had entered into an arrangement that the auditors questioned.

” Chander was actually against this,” DRDO insiders say. ” He was trying to source components for missiles from other countries and that probably angered his masters,” alleges Prabhu Dandriyal, a right to information activist who is almost always investigating the operations of the DRDO. The CGDA audit also said that barely 10 per cent of the projects undertaken by the DRDO were eligible for consideration by the users ( the armed forces).

On November 29 last year, a day before Chander was to superannuate, the Prime Minister’s Office, in response to an RTI request from Dandriyal, said it had received three complaints against Chander. Two had been forwarded to the national security adviser and the cabinet secretary. A third complaint was still being studied.

The third complaint was from Navin Prakash Gupta, who is with the DRDO’s Advanced Systems Laboratory ( ASL), a Hyderabad- based outfit that Chander himself headed before moving to New Delhi.

In the seven- page complaint ( with 17 annexures), Gupta questioned the appointment of Chander as the head of the DRDO after two extensions ( till he was 64 years of age) and doubted if he could be called a scientist of ” international stature” as the ACC (appointments committee of cabinet) had remarked in May 2013 ( under the UPA regime).

In other complaints, the DRDO technologists alleged that Chander had promoted Tessy Thomas over other more qualified peers. Thomas was described in media as India’s first ” missile woman” after she was made project director for the Agni- IV missile.

In the complaints, Chander was also alleged to have created a post for Thomas’s husband, a retired commodore from the navy, and accommodated him in a DRDO laboratory, overriding the claims of qualified DRDO employees.

The responses of the government to the complaints are still pending.

Saraswat, after retirement, joined the Centre for Technology and Scientific Studies as its dean. The centre is associated with the Vivekananda International Foundation (VIF), the think tank that used to be headed by Ajit Doval, now the national security adviser.

Sources in the defence ministry said that although Chander would technically serve till January 31, he had been ” attached” to the PMO. He was to have met a delegation from a western country this morning but the appointment was cancelled.

Defence minister Parrikar has said that ” things will happen” in the DRDO. In the weeks ahead, the DRDO will have to be consulted on important technologytransfer issues with the US. An India- US framework agreement on defence is due to be renewed during the visit of President Barack Obama later this month. A revised list of items for technology transfer under a Defence Trade and Technology Initiative ( DTTI) is in the works. 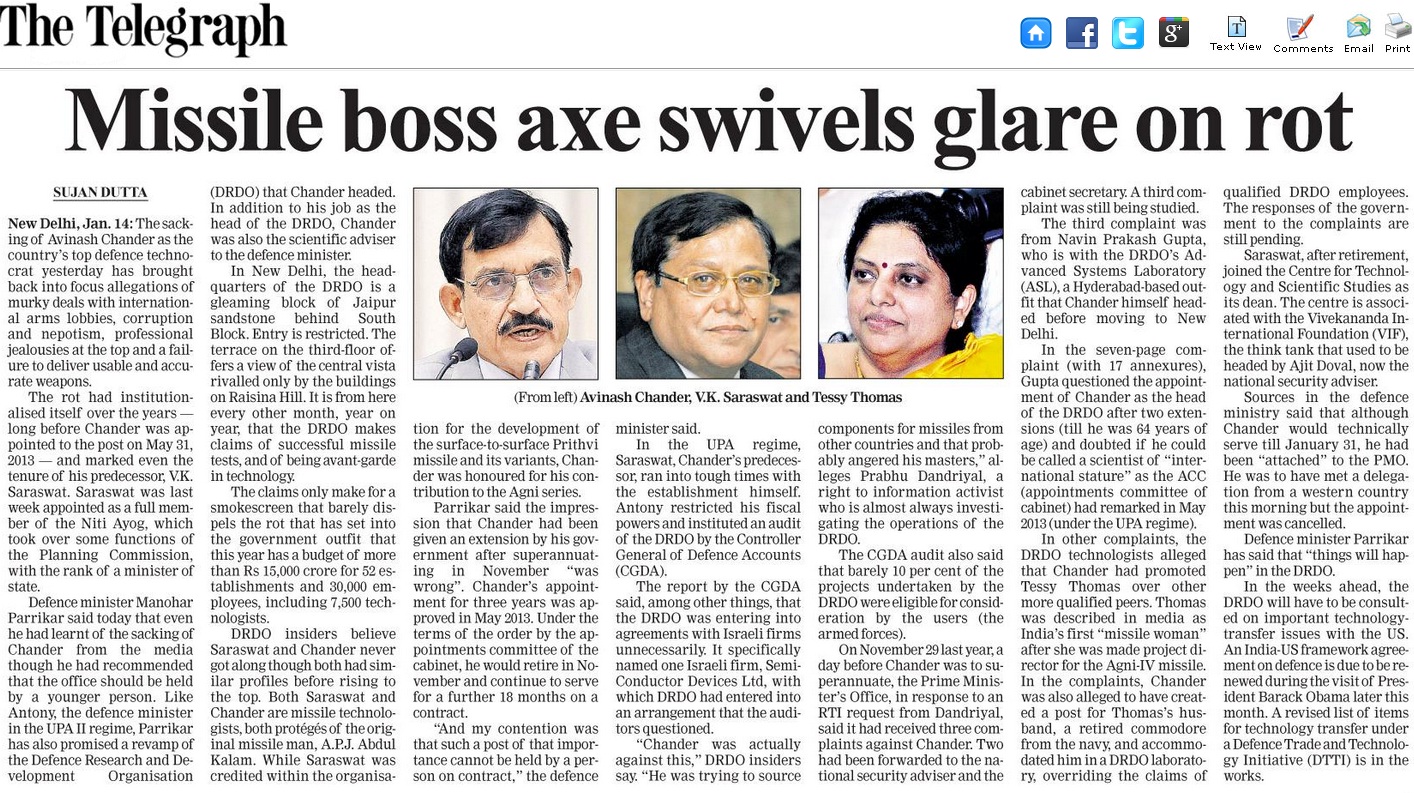