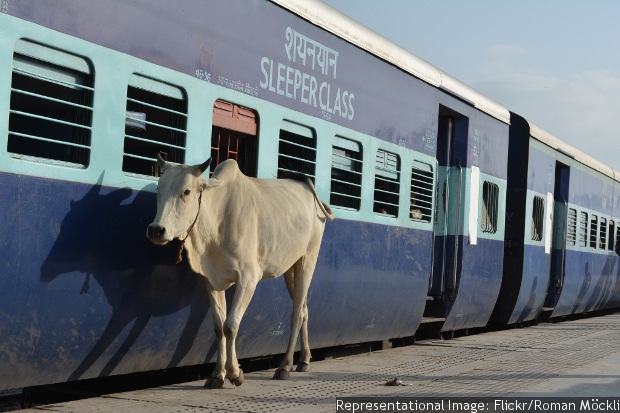 The Indian Railways need to buy 3,350 truckloads of cow dung at Rs 42 crore in 2018 to “recharge”–add bacteria to activate degradation–leaky, malfunctioning ‘bio-toilets’ that it has fitted on 44.8% of trains and hopes to expand to all trains by 2018, according to IndiaSpend projections of data released by the national auditor to Parliament.

Bio-toilets are small-scale sewage-treatment systems beneath the toilet seat: Bacteria in a compost chamber digest human excreta, leaving behind water and methane. That’s how they were supposed to work.

The Comptroller and Auditor General’s (CAG) report on these bio-toilets echoes the findings of our November 2017 investigation into their widespread malfunctioning: The CAG found 199,689 defects in 25,000 toilets.

Responding to the CAG findings, the railway ministry said its criticism was “not correct” and that “some problems of choking were occurring on account of misuse of toilets by passengers”. An official note from December 20, 2017, said: “These issues are being dealt with promptly.”

“By November 2011, the performance issues of each design of bio-toilets were clearly showing up,” the note said. “Therefore, the ministry did not wait until the end of the trial period to make the decision (to order the procurement of bio-toilets from private manufacturers).”

Our November 2017 story quoted studies from the Indian Institute of Technology (IIT) Madras and IIT Kanpur that said the bio-toilets were no better than “septic tanks” and the water they let out no better than “raw sewage”.

Each bio-toilet requires 60 litres–or three large bucketfuls–of inoculum, a mix of cow dung and water, according to the December 19, 2017, CAG report. This inoculum begins the process of breaking down 3,980 tons of human excreta that is released untreated by trains on rail tracks nationwide every day.

The bio-toilets originally used a bacterium found in Antarctica by a defence scientist, who cultured it in 2005 and 10 years later, got a patent on its use. Over seven years to 2017, 97,761 such toilets were fitted in new coaches or retrofitted in existing Indian trains.

The railways went ahead with the toilet installation even though the flaw in the basic model designed by the Defence Research and Development Organisation (DRDO) had been pointed out by an expert panel in 2007. In an interview (to be published tomorrow), Vinod Tare, an IIT professor of environmental engineering, who headed this panel, told us that these bio-toilets had been found ineffective at two venues: Kumbh Mela, the massive gathering of Hindu pilgrims held every 12 years at a river bank, and the army base-camp at Siachen glacier.

The panel’s two-year study was completed in November 2017 by IIT Madras, as IndiaSpend reported on November 23, 2017.

The railways sent a rejoinder to our story–you can read it here–and soon after announced they were exploring airplane-style vacuum toilets.

With the railways failing to produce enough bacteria, the cow dung will be sourced from private sector at Rs 19 per litre. The railways have a workshop–with an installed capacity to generate 30,000 litres of bacteria each month–in Nagpur, but no action has been taken on a 2011 proposal to set up two more facilities, at Kapurthala and Perambur.

No clarity on funds or manpower for bio-toilet project

There is no clarity on two other critical issues relating to bio-toilets on trains: The infrastructure costs involved in installation, including procurement and installation of evacuation machines and hydraulic lifts, and anticipated expenses on training and deployment of manpower.

Further, if all 54,506 rail coaches are to be fitted with vacuum toilets atop the bio-toilets being installed–as is being planned–there will be an additional cost of Rs 10,900 crore. The current market price of a vacuum toilet unit is approximately Rs 200,000.

The additional expense might have been worth it if the bio-toilet scheme, 24 years in the making, had been efficient. But the CAG has amplified concerns about its performance and has endorsed the findings of the IndiaSpend investigation.

The flaws in bio-toilets, according to the CAG

In an evaluation of 25,000 toilets for the period under review (2016-17), the CAG detected 199,689 defects and deficiencies. Here are some major issues, according to the report:

In an email dated May 21, 2016, to then defence minister Manohar Parrikar, Y Ashok Babu, a scientist at the DRDO, had alleged that a “nexus of bureaucrats and industrialists” was pushing for what was “nothing but gobar gas plants involving no technology”.

The CAG report too slammed the railways for the “quality and quantity” of material being procured.

In July 2017, the railways ministry barred three companies (Ms Rail Tech, Ms Rail Fab and Ms Hindustan Fiber) from being considered for railway contracts for an unspecified period. The ministry also proposed that the contract of another company, Ms Mohan Rail, be cancelled.

Negligence in testing of effluents and bacteria culture

The CAG report found that 12 coaching depots of nine railway zones had not finalised the annual maintenance and operating contracts (AMOCs) for bio-toilets.

“Evaluation of performance is a continuous process resulting in addition or deletion from the approved list,” the railways ministry said in a press note in response to the CAG report. It added that “all major coaching depots now had the AMOC contract, while this was progressively being extended to other depots”.

As the CAG found, Indian Railways have not adhered to the guidelines on testing the effluents released by bio-toilets. The tests had not been conducted at all at the Dhanbad coaching depot and records of the samples sent for testing and the results of these tests were not maintained at five coaching depots.

At the Lower Parel workshop in Mumbai, 18 drums of bacteria procured at a cost of Rs 68,400 in May 2016 had been lying unused even after their shelf life had expired.

After 2011, the railways placed bulk orders for the supply, installation and commissioning of approximately 80,000 bio-toilets. The CAG criticised the railways for failing to come up with a “standardized design” for these units. It also pointed to the “large scale proliferation” of 10,000 tanks in November 2011 “before test results of trials on seven different variants had been analyzed”.

Earlier news reports had suggested that the land-based variants of these toilets were unsuccessful.

This is the first of a two-part series. You can read our November 2017 report on railway bio-toilets here.

Next: ‘Railways Went Ahead With A Failed Bio-Toilet Model’

‘Railways Went Ahead With A Failed Bio-Toilet Model’ IndiaSpend

Tech solutions to train-toilet problem exist, but ‘the intention to find a lasting solution is not there’. Bureaucrats only interested in fulfilling targets, ensuring tenures are trouble-free: IIT engineer & professor Vinod Tare tells us. http://bit.ly/2CIZKAY

Some yrs back Jairam Ramesh took initiative & DRDO installed some bio toilets in the villages near Wheeler Island. No one used them.
Biotoilets don’t work in Indian context #period

On-board treatment of human excreta in trains is difficult; evacuation facilities & treatment plants–for compost or biogas–can be set up in the rail yards: IIT’s Vinod Tare, head of 2007 team that studied bio-toilet project in Indian trains.

Who took decision to install bio-toilets in Railway, it appears that decision was taken decades back but installed during UPA regime but NDA is blamed

Bio-toilet model used in Indian trains failed to work at 2013 Kumbh Mela and Siachen but railways still pushing for use in all trains. Our interview with engineer & prof Vinod Tare, head of 2007 IIT study on train bio-toilets. http://bit.ly/2CIZKAY

Huge waste of your and mine..The Indian taxpayers money

A 2007 study, jointly conducted by the Lucknow-based Research Designs and Standards Organisation (RDSO) and IIT Kanpur, also concluded that excreta wasn’t being treated in the bio-digesters. The railways has not made this report public. http://www.indiaspend.com/cover-story/railways-went-ahead-with-a-failed-bio-toilet-model-17151 …

they planted the septic tank in the coaches. #CommonSense