EXCLUSIVE
INTELLIGENCE SECURITY BREACHES
By The Way, I Dropped It
India’s defence data could be an open secret. Ask the NTRO bosses who lost their laptops.
SAIKAT DATTA – OUTLOOK INDIA.COM 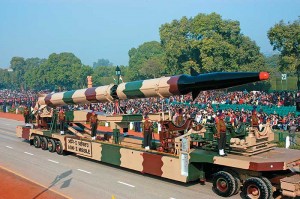 The Agni missile: India’s nuclear delivery mechanism could well be in enemy knowledge

In 2006, Ravind Sistala was one among a clutch of scientists on deputation from the Defence Research and Development Organisation (DRDO) to the National Technical Research Organisation (NTRO) in New Delhi. Set up in the aftermath of the 1999 Kargil War, NTRO was meant to be a single technical intelligence facility to keep watch on India’s hostile neighbours. It was also supposed to issue warning signals to those manning India’s missile systems and nuclear warheads in real time so that they could retaliate in case of a possible enemy strike. Sistala’s was a crucial job. The fortysomething was the centre director of NTRO’s missile monitoring division, a position that called for high levels of responsibility and secrecy. But very few within India’s security apparatus are aware, even today, that Sistala was involved in one of the biggest security breaches in India’s post-Independence history. He compromised a Rs 1,850-crore intelligence-gathering programme that had key linkages to India’s growing nuclear arsenal and missile systems. Unencrypted ‘Top Secret’ data pertaining to these was stored on Sistala’s Hewlett-Packard laptop (given to him by NTRO) which disappeared mysteriously while he was on his way to the Delhi airport in early 2006. Did the information-packed computer fall into the wrong hands? Was it stolen by an enemy agent? Even today, no one knows where the laptop is. If still in enemy hands, it has the potential to inflict immense damage.

Ideally, such a security leak should have set alarm bells ringing and occasioned a swift and thorough investigation by the IB, RAW and Delhi Police. But rather than give the incident the attention and inquiry it deserved, a small but extremely powerful group of people—comprising a PMO official, DRDO scientists on deputation to NTRO and intelligence officials—helped Sistala escape any indictment by holding just an in house inquiry, which unearthed little. The missing laptop forgotten, Sistala continued as the head of the sensitive missile programme for another two years, and then returned to the DRDO.

Two years after the Sistala episode, another security breach took place in the NTRO. Arun Dixit, the centre director of the organisation’s atomic explosion division (AED), lost his laptop somewhere in Washington DC during an official trip to the US with the NTRO chairman. The laptop was crammed with top secret data on India’s intelligence on the nuclear weapons programmes of several countries, including Pakistan, China and North Korea. But like in Sistala’s case, the powerful lobby of defence scientists once again scuttled a thorough investigation. The leak was buried and kept out of the files. Dixit too escaped any scrutiny and still serves in the NTRO in the very same post.
Lost Laptops And Their ‘X’ Files

Secret coding of all communication used by the Intelligence Bureau (IB), Research and Analysis Wing (RAW), the defence forces, and the paramilitary forces, including Border Security Force
Logs of intercepted Pakistani communications
Action taken Case still unsolved. None of the hard disks have been recovered. DRDO has practically closed the case.

Sistala and Dixit clearly violated OSA, but escaped. They were also liable to 14 years’ imprisonment.

The NTRO was set up in the summer of ’03. A year earlier, a Group of Ministers had handpicked RAW special secretary R.S. Bedi to set up the new intelligence outfit. Bedi started the process by setting up an office in room no. 326, Sardar Patel Bhavan, in the heart of Delhi, on March 29, 2003. The organisation was formally notified in July.

Set up to plug gaps in India’s security establishment post the Kargil debacle, the NTRO’s charter eventually went much beyond the mere act of gathering intelligence. It became a key element within the security apparatus, hitting headlines recently when Outlook reported its ability to pluck GSM phone calls off the air. Bedi had served in RAW’s Aviation Research Centre, which monitored the missile and atomic programmes of neighbours. NTRO took on this responsibility after it came into being.

NTRO’s task thus was to monitor and gather intelligence on all missile programmes in the region and convey the data in real time to the Strategic Forces Command (SFC), a special military organisation that mans India’s nuclear arsenal and would deploy it in the event of a nuclear war. The SFC would also, based on NTRO data, periodically review and upgrade its positioning of nuclear missiles, and coordinate with the defence forces in launching a counter-strike against any nuclear threat.

This called for a credible linkage between a vast and intricate network of ground-based radars, satellites, secret command codes and SFC’s nuclear arsenal. NTRO’s missile monitoring division established these linkages and set up an early warning network for the SFC. Sistala had a key role in creating these linkages and as such had access to the most sensitive data on India’s capabilities, response time and secret codes. Naturally enough, all these details were part of the presentations, notes, documents, files and folders—all marked ‘Top Secret’—he had on the laptop he was given by the NTRO. Standard rules mandate that a laptop given by the organisation cannot be taken home or used to connect to the Internet. But these being early days for NTRO, Sistala was travelling around the country making presentations to security officials, beginning with then NSA M.K. Narayanan to the three service chiefs, the SFC commander, the intelligence chiefs and other top DRDO scientists who were to work on the technological aspects of the project.
This is the time his laptop went missing. Shockingly, NTRO buried the episode in no time. A preliminary inquiry was ordered to be carried out by Brigadier Anil Malhotra, its counter-intelligence official, but it was quickly wound up. By this time, Bedi had retired from NTRO. A powerful lobby of defence scientists, led by R. Chidambaram, the principal scientific advisor to the government, had already determined his successor: DRDO scientist K.V.S.S. Prasad Rao. Rao had no previous experience in intelligence but he had served as the staff officer to Chidambaram for several years. Sistala, also from the DRDO, got a much-needed reprieve from the ongoing inquiry. He continued with the missile monitoring division for two more years before returning to the DRDO to work on air defence radars.

Outlook’s attempts to elicit an official comment from NTRO via a detailed questionnaire sent a week before going to print met with silence. Phone calls and text messages to NTRO chairman Prasad Rao, its advisor P.V. Kumar, Sistala and Dixit evoked no response either. DRDO, in a cryptic response to an Outlook query, said it wasn’t aware of any lapses by Sistala at NTRO.

Such security breaches are nothing new for the clique that still lords it over DRDO and NTRO. In Oct ’03, 53 computers were stolen one night from two DRDO labs—the Systems Analysis Group and the Institute for Systems Analysis and Studies—in Metcalfe House in Delhi. The computer carcasses were found later, but the hard disks had been removed. They contained secret encryption codes and communications of the army, navy, air force and all central police organisations. Till date, no DRDO scientist has been blamed. Many have even been promoted. A police investigation made no headway, while an internal inquiry remains alive on paper even though many of its members have retired.

It’s also ironical that while many other officials have been prosecuted under the Official Secrets Act (OSA) on flimsy and concocted cases (see following story), Sistala and Dixit have escaped, despite being in clear violation of the OSA. In fact, since the leaks were related to India’s nuclear defence as well as secret codes, they could easily have attracted a penalty of 14 years’ imprisonment. Instead, the duo has continued in their careers. Should India’s intelligence agencies really be allowed to operate without even a modicum of accountability?